The Eggshell Skull Doctrine and Its Application in Personal Injury Litigation

The Eggshell Skull Doctrine and Its Application in Personal Injury Litigation

There are roughly 1.7 million rear-end collisions on U.S. roads each year. 1 Although most individuals could walk away without injury from a fender bender, some may not be as lucky if they suffer from a previous medical condition causing them to be more susceptible to injuries. Instead of walking away with no injuries, a number of unfortunate victims can walk away with severe injuries or injuries that aggravated prior asymptomatic pre-existing conditions.

Despite the injuries resulting from a previous medical condition, the at-fault driver will still be liable for the full extent of the victim’s injuries thanks to the doctrine known as the eggshell skull, or thin skull, rule. 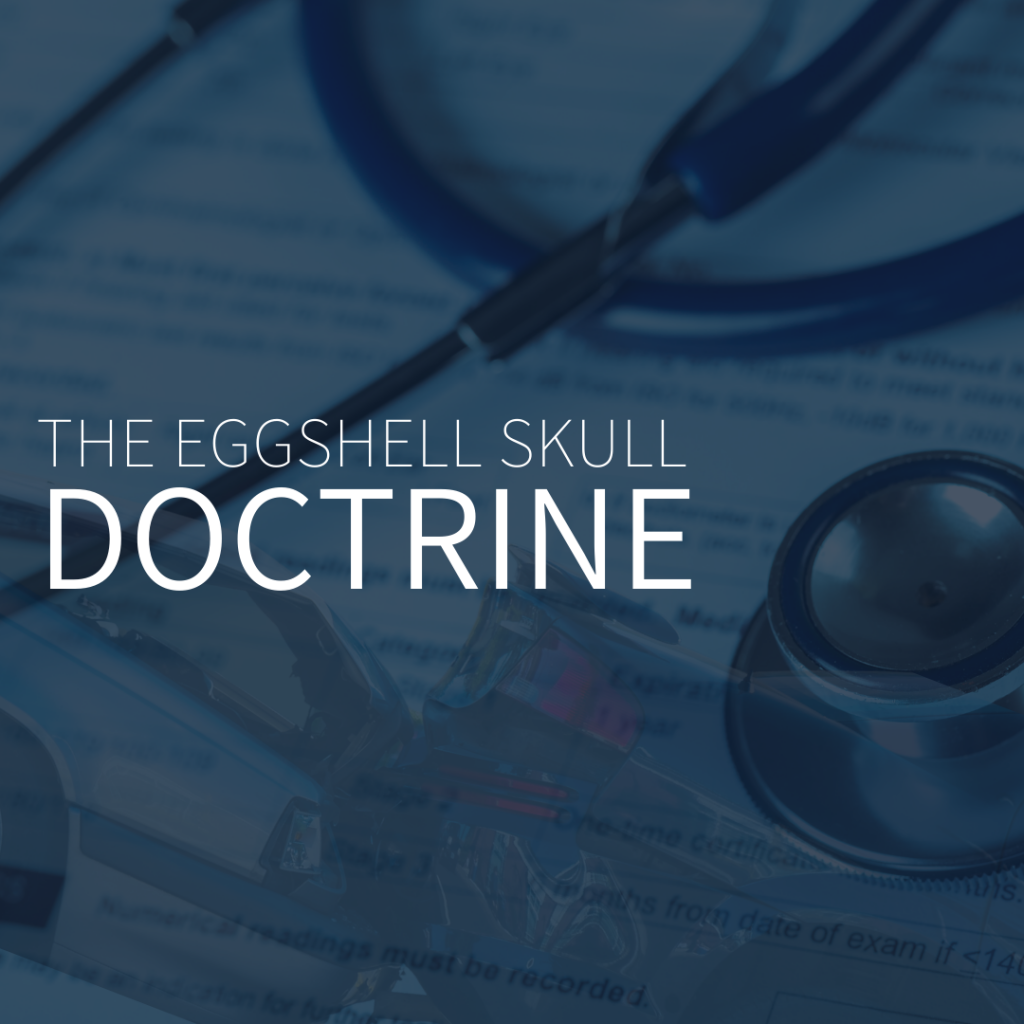 What is the Eggshell Skull Doctrine?

The “eggshell skull” rule generally applies in the following situations:

When the eggshell doctrine is used in personal injury litigation it requires the defendant to take the victim as-is, meaning that all pre-existing injuries and health conditions must be included. The ability for a victim to receive compensation will not reduce from an at-fault party for the full extent of damages, even if the victim had a condition that put him or her at an unusually high level of risk.

In addition to physical damages, the eggshell skull doctrine may also apply to emotional injuries. Each state has a varying approach to the application of the rule to emotional damages. Some hold that only those emotional damages that an ordinary person would expect to have as a result of a car accident are recoverable, while other states have permitted increased recoveries based on pre-existing emotional/mental health conditions.

Why is the Eggshell Doctrine Important?

Tort damages are meant to restore the victim party to the condition they were in had the tort not occurred. With that in mind, the application of this doctrine to personal injury cases ensures that the injured person(s) is entitled to recover full compensation for all damages that proximately result from a defendant’s tortious act. This means even if one or all of the injuries might not have occurred but for the plaintiff’s preexisting physical condition, disease, or susceptibility to injury.[2] This added protection for those who are qualified for the eggshell doctrine is a huge relief. The extra compensation gives the victims the chance to get back to their quality of life prior to the accident regardless of preexisting health conditions.   These damages are not, however, unlimited.  In fact, the jury will receive a specific instruction as follows: 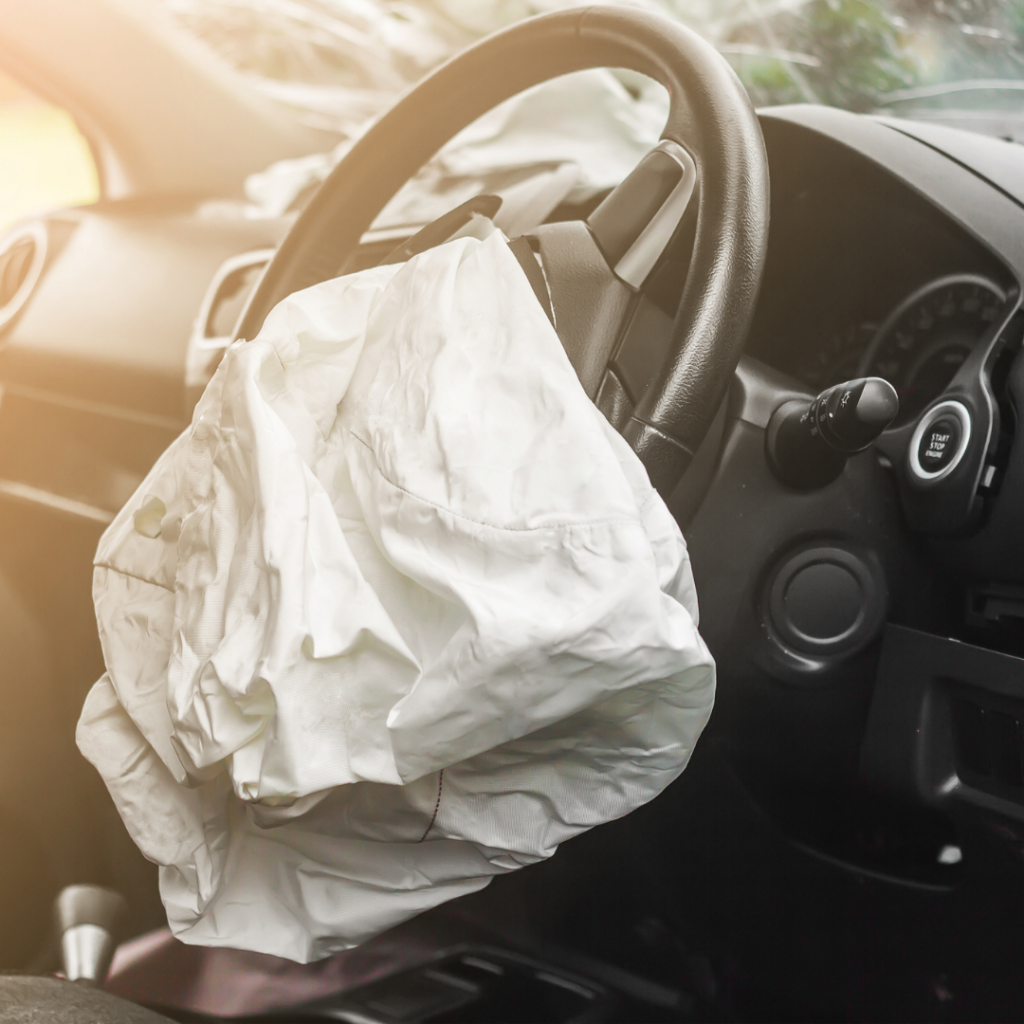 In essence, although a tortfeasor is responsible to pay for damages caused to an eggshell plaintiff, the law only requires compensation to the extent that any pre-existing condition was aggravated.  For example, if a plaintiff had a medical condition in his/her back that will require surgery to his/her back in 5 years, but that plaintiff was involved in a crash that required immediate surgery, the jury should compensate for 5 years of damages and not for the lifetime of the plaintiff.

An intervening cause is an event that occurs after the initial act of negligence and breaks the chain of causation. An intervening cause can be an action of another person or an act of nature. The law applies intervening cause in the same fashion as the eggshell skull rule. However, when an intervening event causes a new injury that re-aggravates the victim’s original injury, it may become difficult to show what damages, subsequent to that event relate back to the injury that made the basis of your claim.  A judge or jury may find that those damages were unforeseeable. It can also be difficult to obtain medical evidence or testimony from doctors establishing the extent of your claim. As a result, the original defendant may not be responsible for the victim’s additional damages.

Comparative negligence arises when the victim was partially at fault in causing the accident, and the victim’s percentage of fault reduces their recovery. Depending on your percentage of fault, you may be unable to recover the full amount of your damages, even if you are an eggshell plaintiff.

In Texas, the law of comparative negligence is called proportionate responsibility. If you were 50% at fault or less, your recovery is reduced by your percentage of fault. For example, if you were 30% at fault in causing your accident and suffered $100,000 in damages, you may only recover $70,000. But if your percentage of fault is 51% or greater, Texas law prohibits you from recovering any damages.

In Darden v. City of Fort Worth, the Court held that the district court erred in not applying the eggshell skull rule, and that “a tortfeasor takes his victim as he finds him” to Darden’s claim. Darden’s preexisting medical conditions increased his risk of death during a struggle, and in that way, they contributed to his death. The evidence suggested that Darden would not have suffered a heart attack and died if he had not been tased, the plaintiff properly showed that the use of force was the direct and only cause of Darden’s death.[3] Darden’s counsel was able to prove that the tortfeasor must take the victim as he finds them.

Just as someone cannot control a pre-existing medical condition, injuries sustained from an accident cannot also be controlled. The eggshell doctrine was established to help those receive the care they need to assist in their recovery. Although measures like the intervening clause and comparative negligence are in place to make sure that the doctrine is not abused, ultimately those who qualify will still have the chance to receive additional damages. All in all, those who have pre-existing medical conditions can be further compensated and should reach out to a licensed attorney for help navigating the path to recovery.

Wondering how COVID will affect your business reopening? Check out our blog discussing all the factors you need to consider.