March is Women’s History Month and we just celebrated International Women’s Day on March 8th, so it only felt fitting that we focus the limelight on the impressive female attorneys here at Watts Guerra. 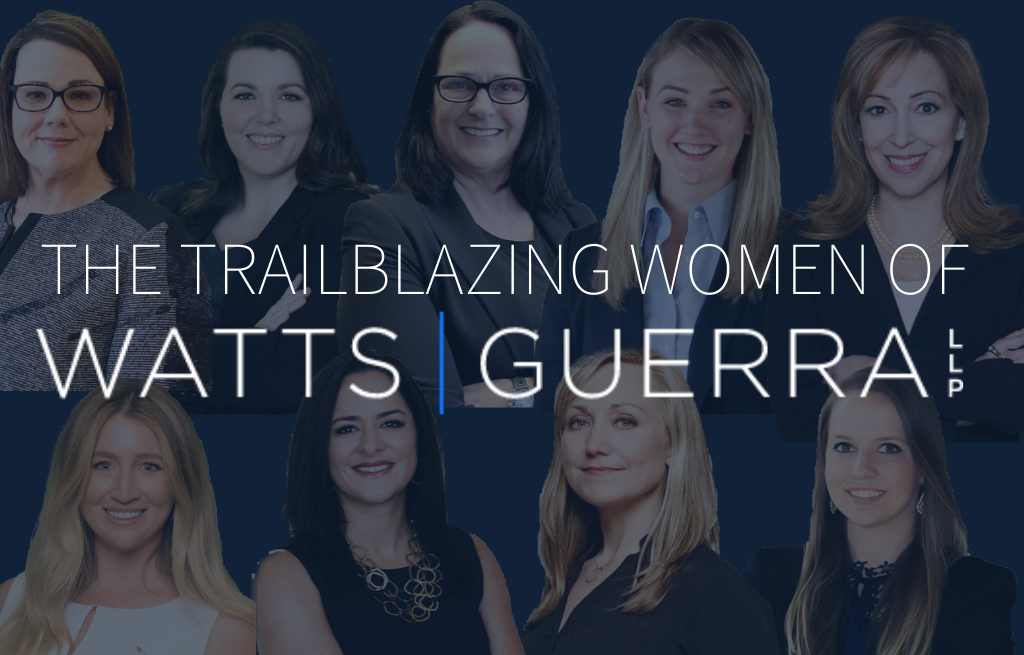 The legal industry historically has been a male-dominated field however that has transformed drastically over the years. According to the Census, in 1960 only 4% of women were lawyers but as the years have passed, that number has dramatically increased to 38% entering the profession. What has attributed to this growth? Besides the increase in women’s rights and labor force participation, women have had an increase in breaking into traditionally male job fields as well.

At Watts Guerra we have female trial lawyers who have recently passed the bar, just starting their careers, as well as ones with over 30 years of being a practicing attorney. In fact, many of our female attorneys have been practicing longer than some of their male counterparts.

According to one of our attorneys Jennifer Neal, she believes that being a woman in the courtroom brings a counterbalance to their male counterparts which can add an endearing element for the jury. No one knows this better than the women of Watts Guerra – who are extremely experienced in litigation and have handled many depositions, hearings, and trials in their careers.

Memorable Moments in the Litigation Process

Each step of the litigation process requires many hours of work all of which can lead to memorable moments. For some, the deposition process can leave a big impact. Shalimar Wallis, one of our most experienced and respected attorneys, consistently has her passion reignited for her career during the deposition process every time she is presented with a case. Hearing her clients tell their stories firsthand drives her purpose to fight for justice for them.

For others, their memorable moments can be found during a trial in the courtroom. For some it was their first trial like it was for attorneys Rebecca Page and Meredith Drukker Stratigopoulos. Erin Rogiers had her memorable moment while working with mentors during a long and intensive trial representing hundreds of clients. Seeing relief brought to the client with a favorable decision is what makes all the time devoted to each case worth it for our attorneys.

Since litigation can be a male-dominated field, our Watts Guerra women turn to each other to help mentor and grow their careers. Some of our female litigators, like Shalimar and Jennifer, look to the trailblazing women of the United States Supreme Court for inspiration since they all took different paths and ended up serving as a beacon of light in a place that is not gender-equal.

Meredith and Erin are impacted by practicing attorneys that dominate their field. Meredith is inspired by Lisa Blue as her expertise and education laid the foundation for her to pick the right jury for any case all while playing to her strengths throughout the entire litigation process. Those elements make Lisa’s footsteps one any female litigator would aspire to follow.

Erin was impacted by an attorney she worked with in New Mexico, Randi McGinn. She admires how Randi is brilliant, poised, unmatched in her preparedness, compassionate to her clients, creative, and someone who can out-argue anyone – all things that Erin esteems and strives to hone in her own career.

Others do not have to look outside of the Watts Guerra organization for their mentors. Rebecca looks up to Shalimar for inspiration. She admires how Shalimar handles all adversity with tremendous class and is always prepared for anything that comes her way.

Alicia O’Neill, another highly experienced attorney who is head of our Mass Torts Office, greatly admires her mentor, Watts Guerra Mass Tort attorney Shelly Sanford. Shelly played a pivotal role in teaching Alicia the Mass Tort practice and modeling for Alicia the grace and strength it takes to be successful in a very tough area of practice.

Alicia will never forget a meeting with Shelly, very early on, when Shelly told her that she believed that one day Alicia should be as accomplished of a Mass Tort attorney as Shelly. Alicia was not at all sure it would happen that day, but she is forever grateful for Shelly for teaching her and providing her with the tools to work toward that goal. That act of believing in her and purposefully choosing to mentor her is something that Alicia hopes to pay forward to the next generation of badass Watts Guerra lady Mass Tort lawyers.

The women here at Watts Guerra are tough and resilient. They enter the courtroom ready to take on any opposition no matter what. Unanimously they all agree that being a female does not change your success in the courtroom. Your success is based on your hard work, character, and ability to persuade during the litigation process. Any successful lawyer regardless of gender excels at reading people, being authentic, and shows up fully prepared. Alicia’s advice to any lawyer is to “be your most authentic self. Being you, open and human in front of the jury, is your unique advantage, no matter what gender you are. I’m curious, quirky, and protective. An odd combination – but because those things are true – they have served me well in countless trials. Jurors study you and will see through anything less.”

Shalimar lays it out perfectly. “Others might disagree, but I think my strengths, the things in which I excel, would be there regardless of my gender. However, the way in which I, and other women, deploy those skills is where the contrast and the value lies.”